Temporary new early release of super – what you need to know 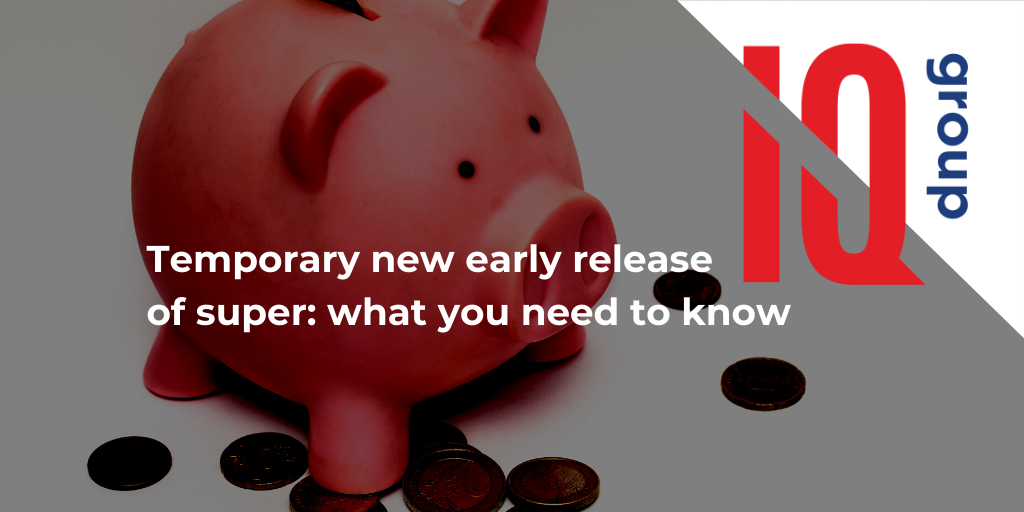 All Australians are concerned about the future, and the reality or possibility of financial hardship as a result of this pandemic.  While the Government has announced programs to help people, like the JobKeeper initiative that might benefit 6 million Australians, many people may be taking advantage of another Government announcement – to take some of their own money out of super.

It’s been estimated that up to $56 billion might be cashed out of super over the next 6 months – although the Government’s own estimate is $27 billion.  This is at least 2% of the money in APRA regulated super funds, and perhaps quite a bit more.

The mechanism to allow this is an addition to the compassionate grounds early release of super on the basis of financial hardship caused by coronavirus.  This means a release can be authorised by the ATO – rather than other financial hardship releases which have to be approved by a super fund (applying specified criteria).

This has been legislated as a temporary provision that will be available over two periods to 24 September.  However, as many hundreds of thousands – perhaps even a couple of million members – will take advantage of this temporary opportunity, funds and administrators are scrambling to change what is generally a manual procedure for a small number of applications into an automated process for possibly millions.

It’s going to be very important that the industry get this right.  If there are delays of many weeks or even months in processing these claims, there will be Government and community outrage.

There have already been more than 400,000 expressions of interest registered with the ATO.  The first applications can be made on 20 April – a fortnight before the JobKeeper allowance becomes available

The key elements of the new early release provisions include:

For those who have lost their jobs as a result of the pandemic induced downturn in the economy this is likely to make a significant difference in their ability to support themselves and their families.  It does however come at a cost!  Members will be crystallising losses in superannuation investments, selling after significant falls in the value of shares and other assets and a loss of future superannuation earnings.

For superannuation funds this will require a new benefit payment type to administration systems in a very short period.  It will require them to mobilise resources when many are working at home, depleted due to illness and offshore processing centres are not available.  Funds will be under pressure to maintain service levels at a moment that matters for members.

Further, superannuation funds will need to readjust their portfolios to ensure they have the necessary liquidity for a significant loss of funds from the superannuation system.

Finally, it will be an important time for funds to ensure their members and employers understand what the fund is doing and what the options are available to members to get through a tough period.

Yesterday, IQ Group held a lunch time client forum. This was the company’s first online Q&A session during the coronavirus pandemic, and it ran successfully. Customers had the opportunity to ask their questions and IQ Group’s Head of Industry Insights, David Haynes, provided in-depth responses.

If you would like to find out more about the temporary new early release of superannuation changes, please contact IQ Group at: info@iqgroup.com.au.