Implementing superannuation tax changes may be a challenge for industry 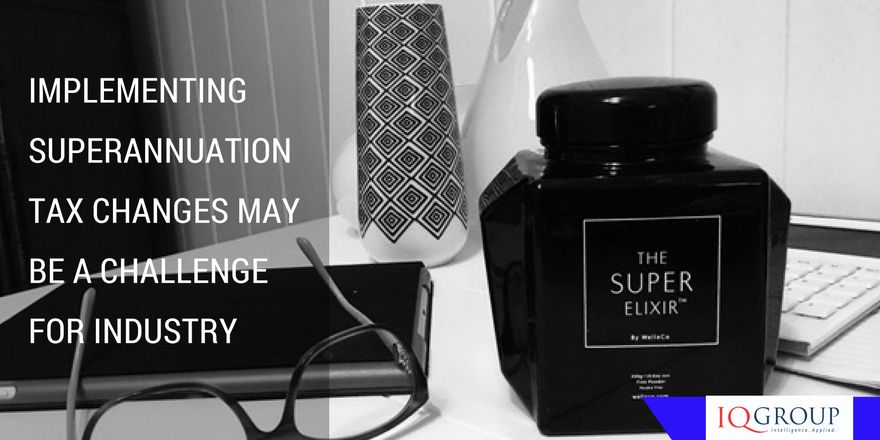 There’s a potential disconnect between how governments of all persuasions say they’re going to implement change to super and how they actually go about it. Simple, with time to consult is their theory; potentially complicated, with possibly shorter consultation time is their practice. What the Government is doing with the Budget super measures is certainly food for thought.

The Government accepted the recommendation of the 2015 Final System Inquiry to give industry appropriate time to implement regulatory change however this may not be the reality for this round of changes.

The shorter time than expected the super industry is being given to implement complex regulatory change may lead to a range of unplanned challenges, including the risk of increased costs, complex outcomes and unanticipated speed bumps – and this may mean less than optimal outcomes for Australian super fund members.

Immediately after the Federal Budget, the Government went to the election taking a raft of superannuation policies with them; with super having a high focus throughout the campaign.

After the Federal Election, the re-elected Government undertook the process of negotiating with interested parties, resulting in a staggered release of draft legislation.

The first stage was released in early September, and covered:

However, following negotiations with the backbench, there will be no changes to the work test for those aged 65-74, and is delaying the catch up provisions (see below) until 1 July 2018.

In an unusual scenario, the Government only gave eight days for the consultation on this package of legislation.

The second stage was released in late September, and covered:

The nine day consultation period on this has just closed, with the Government providing draft regulations to accompany the draft legislation. This is not something to celebrate because the explanation of the $1.6 million transfer balance cap alone takes 64 pages, and that’s followed by 37 pages of associated draft legislation. The complexity of the legislation will be reflected in the complexity of its implementation.

The third, and probably final, stage will cover the new $100,000 annual after-tax contributions cap that replaces the previously announced – but now withdrawn – $500,000 lifetime cap. Draft legislation on this is expected in the next fortnight.

The Government intends to introduce all of this legislation to Parliament during the current session, that is, 1 December, and hopes to get it to the Senate by then. Almost all of the legislation is scheduled to come into effect from 1 July 2017.

Given that the legislation also has to pass through the Senate, may be referred to a Senate committee, and the positions of the ALP, Greens and many Senate cross-benchers may challenge these bills; the time frames are potentially becoming very tight, and may pose a challenge for the industry, software developers and the ATO to successfully implement process and system changes.