Has the Productivity Commission underplayed the importance of cost efficiency in superannuation? 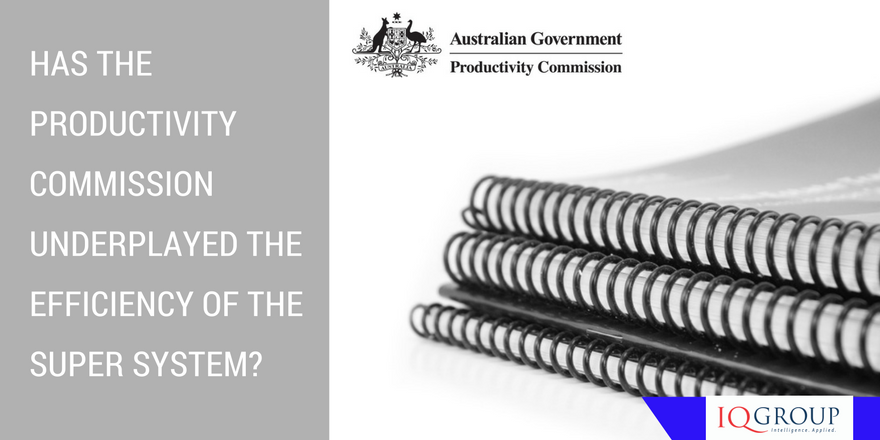 In its draft report about assessing the competitiveness and efficiency of the super system, the Productivity Commission has proposed over 100 indicators, and in so doing, has underplayed the importance of improving the overall administrative and operational efficiency of the system.

When the Productivity Commission was asked by the Government to develop criteria to assess the efficiency and competitiveness of the superannuation system, the scope of their study was to specifically include operational efficiency – delivering products and services in a way that minimises costs and maximises value.

Despite this, the role of cost minimisation in improving operational and administrative efficiencies has taken a back seat. Where cost minimisation is mentioned, it is often harnessed in support of an argument for harvesting great scale efficiencies. This is despite the correlation between scale and efficiency not being as strong historically as it should be.

The Productivity Commission has taken a three step approach:

The report proposes system-level objectives, identifies questions to be asked and answered, and across both competition and efficiency suggests 27 criteria and 115 indicators to be used in the framework.

While this may be the function of a work in progress, this large number of indicators and criteria runs the risk of not being appropriately weighted, prioritised and categorised – and having collected data from so many sources, the absence of some data becomes even more problematic.

While the Productivity Commission may be expecting much of this information to come from existing data sources, new surveys and sources of data will need to be established for the collection of the necessary data.

The irony is that the weight of this administrative burden is likely to be heavy, costly and time-consuming, and quite at odds with the recommendations of the Financial System Inquiry – and the philosophy of the present Government – to reduce the regulatory burden.

While there is a heavy emphasis on the importance of funds collecting information on their individual members and using it to design products that better meets specific member needs, the report is light on about topics such as data management, innovation and new technologies. SuperStream rates a mention, and even its own indicator, but other issues such as the impact of new payment systems are not mentioned.

The draft objective about maximising net returns in the long term includes a criteria asking if costs incurred by funds are being minimised, taking into account service features provided to members, and lists a few indicators of this (eg, cost savings from SuperStream) but this is dwarfed by the bulk of other criteria and indicators.

Cost minimisation is a major contributor to return maximisation – and not just in the context of scale – and should be recognised as such. This doesn’t mean that we need to have a dozen explicit operational efficiency indicators and benchmark. There would be significant costs associated with that approach, not least of which would be the additional reporting requirements imposed on funds. Far better to identify simply identify cost minimisation (along with return maximisation, good governance and quality member services) as a non-prescriptive factor to be taken into account in determining the efficiency of a fund.