BEING A GRAD IN COVID-19 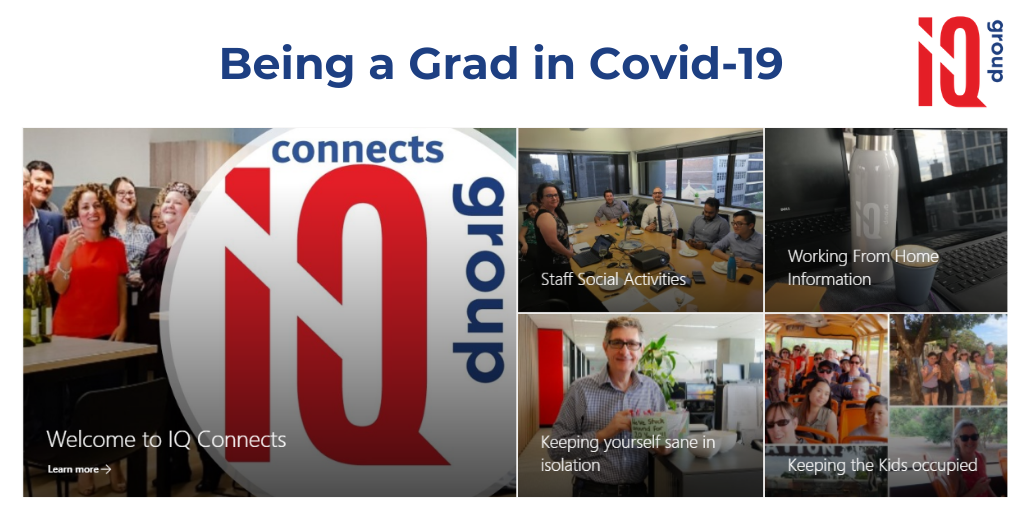 I know that it is cliched but my expectations in January for 2020 were nothing close to how this year is turning out. On New Year’s Eve I was standing in the middle of thousands of strangers, in the heart of Vienna, with my mother as we counted down to the New Year thinking about what it would bring. I had high expectations for 2020, it was going to be even more amazing than 2019. I was moving to a new city, starting a new job, learning new skills and knowledge, and making new friends. Then Covid-19 hit Australian shores and the nation, and in line with the rest of the world, we went into isolation.

In the midst of navigating what was our new norm, I watched the IQ team step out of traditional roles and unite as a team, to ensure the transition to a virtual business was seamless and successful. Steering committees were formed, help buddies were assigned and IQ Connects was formed. IQs first priority was reaching out to everyone in our team to make sure they were okay, and they had all that they needed. IQ Connects became the network where internal communication and information tools brought us together. But more than that, it is about conversations, activities and personal connections that provide support and community. We now have virtual exercise, trivia and family fun competitions as well as facilitating our Friday Social Time. We are still a team!

I have been involved in a range of projects since our isolation began in March, allowing me to create a greater knowledge base and seize opportunities I would not have otherwise had. Whether it’s been regulatory change such as the COVID-19 early release of benefits, or Best Practice Business Processes, the past eight weeks have shown me the importance of adaptability, resilience and courage; not just in business but in life. These are qualities that I have noticed IQ Group employees have in spades, qualities that are nurtured and encouraged by the Executive team and have allowed us to continue to do our best work for our customers.

Two-thousand and Twenty has not begun anything like I thought it would. Being a grad has not been what was expected when I first started with IQ Group. The world has changed but this is a time I am going to remember for the rest of my life.