ASFA Melbourne Briefing “Post Election – Where to from here” 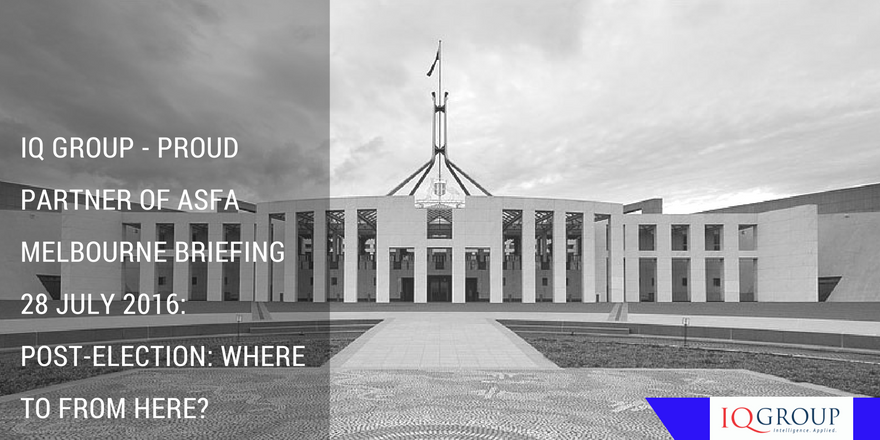 IQ Group continued its long held association with ASFA by partnering with ASFA and presenting the Melbourne Briefing “Post Election – Where to from here” for an interested audience.

The guest speakers were Kerry Chikarovski and Nick Sherry, and these well spoken former politicians on either side of the political divide, delivered a simple message …we need considered leadership and superannuation policies that provide reforms to meet the challenges of the Intergenerational Report.

Kerry talked politics, here and abroad. Brexit and the American Presidential race all have common themes…a disconnection with mainstream politics and an electorate deeply suspicious of politicians. This played out in our last two Federal elections here in Australia, with a broad crossbench to engage and manage. This time around though, the crossbench might be less troublesome for Malcolm Turnbull, with the numbers tipped to favour the government amidst some minor horse trading on policy. The backbench however is a different story…challenging might be the appropriate word here. From my perspective, I think Malcolm will pay a little more attention to the “backbench meter” with a view to “win over” rather than alter policy.

Moving on to Nick’s address, the pressures facing superannuation reform are longevity and birth rate decline. In short, an ever increasing number in retirement age versus declining numbers in workforce age to provide support. How do we fund a 25-30+ year retirement? It’s a puzzle to solve. However when confronted with an issue, you invariably go back to the beginning and for our industry, superannuation was introduced to supplement the pension, not to replace it. As much as we’d all like our superannuation to support us through retirement, we know that the pension is not going to go away…there will always be a percentage of the population who will rely on the pension.

As far as superannuation reform goes, the topic of tax concessions featured prominently. The tax break between high income earners compared to the middle class is vastly disproportionate. A reduction of the tax concession for high income earners, coupled with a recommendation to increase the age of access to transition to retirement would all help improve the bottom line and provide fairness in the system.

What was really great to see between Nick and Kerry was a respectful approach to the discussion even though on certain topics, there are differing views. It comes back to that comment on considered leadership, and it’s a stand out quality that will help drive the common good for our nation and one that could benefit other world stages, say for example the current American Presidential race.

On another note, as a partner for the event the IQ Group held a lucky draw to win an iPad and congratulations to Michelle Westaway, FSS Trustee Corporation on the win…we hope the iPad comes in handy for you throughout the year.