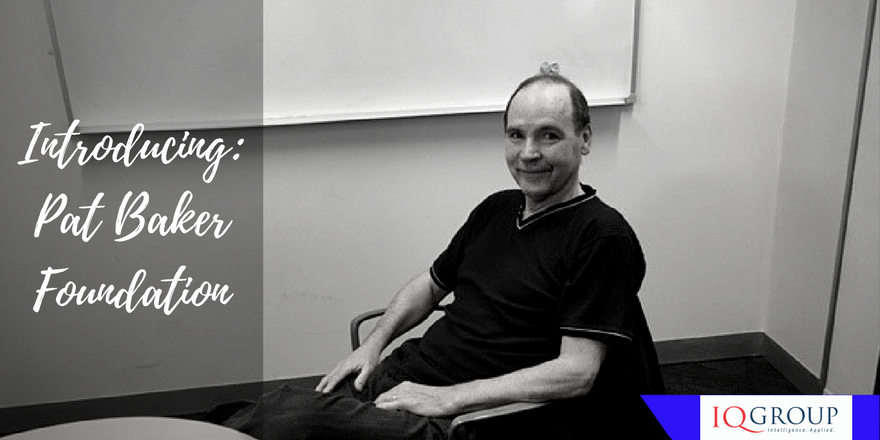 In 2017 we will be launching the Pat Baker Foundation in memory of a wonderful colleague. Instrumental in building IQ Group in Australia, Pat Baker was a kind, enthusiastic and a genuine man.We hope by starting this Foundation in his honour his memories live on.

The goal for the Foundation will be to help two charities, including one international and one national charity.

Nominated by ballot, our international charity is Hopes and Dreams™. Hopes and Dreams™ has two key goals – to provide clean water in remote areas in Africa and India and assist the poor in providing Micro Enterprise Development opportunities. The focus is on extreme poverty where people live on less than $2 a day.

With the goal to change someone’s destiny, the concept is to teach small business skills to help women that would not necessarily be able to borrow funds to start a small business. With a small loan and a mentoring program women use their skills to generate an income that can in turn fund the next batch of stock for ongoing trading.

Our support of Australian charity, The Smith Family is another community-based initiative with a target for IQ Group to support five school kids receive a better education. Continuing the theme of breaking the poverty cycle, The Smith Family focuses on children and the belief every child should have the opportunity to an education.

By helping to provide this we are empowering these young minds to build a future for themselves.

IQ staff decided instead of donating Easter Eggs they collected money for The Smith Family.Together we collected $460.

I am proud to have been nominated as the Head of the Pat Baker Foundation.As a mother, I understand that a child’s education is very important and I want to be able to help make a difference.

On behalf of IQ Group and its staff we will be supporting our nominated charities, Hopes and Dreams plus The Smith Family and ensuring the legacy of Pat is never forgotten. 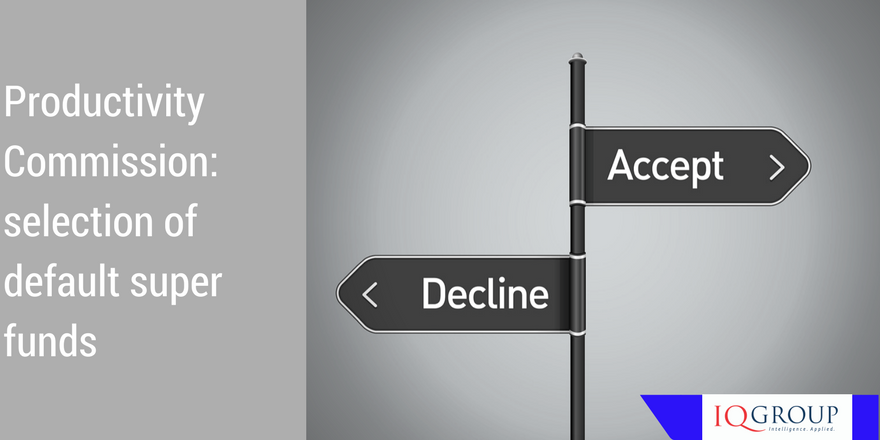 The Productivity Commission has released a draft report on the selection of default superannuation funds – how you are allocated to a fund if you don’t make a choice. Where it has received the most attention is for its apparent efforts to move the arrangements away from the industrial relations system. At the moment, unions and employers agree on the default super funds that are listed in each industrial award and enterprise agreement.

The report is also noteworthy in putting forward four models for a new default system, each of which is generally intended to reduce the number of default funds to between four and ten.All default funds must now be MySuper authorised and there 120 of these – so this means they are recommending the wind up or merger of over 90% of existing default funds.This would result in massive change regardless of the timetable for change.

These changes have to clear many political hurdles before they become a reality but this blog focuses on changes that will almost certainly take place regardless of what the Productivity Commission recommends.

Like every other report in recent times, the Productivity Commission recognises the role of technology and associated government initiatives in improving competition, but their report follows these developments rather than leads them.

The draft recommendations read as if they are suggesting initiatives to build on the existing specs for Single Touch Payroll.In fact, they are mainly identifying work already in progress.

The report recommends allowing members to register online their choice to open, close or consolidate accounts when they are submitting their Tax File Number on starting a new job.It also recommended facilitating the carryover of existing member accounts when members change jobs.Both of these are already in the draft design principle for the new online forms for new employees.

An ATO forum held earlier this month presented the draft design principles for employee commencement, and these included:

“…the process should not encourage the unnecessary proliferation of multiple member accounts (e.g., including avenues to facilitate consolidation of multiples by a member and the simple selection of an existing account where required).”[1]

The Commission recommended “universal participation” in these processes, suggesting compulsion.In contrast, the ATO is proposing to roll out these new online forms on a voluntary basis.I question why compulsion would be necessary if the online form can present such an overwhelming value proposition.There may be a comparison here with ATM’s and bank branches:ATMs may be voluntary but they have well and truly taken over from the use of bank pass-books.

Creation of a Central Payment Hub

It is also curious that the Commission has recommended looking at the establishment for a single centralised clearing house by the government – a payment hub by which employers would make contributions to all super funds.There are many stakeholders who would have supported this approach as part of the initial design of SuperStream some years ago, but I don’t know if they’re now recommending the dismantling of SuperStream, gateways and the gateway network or if they were not fully appraised of the extent of these things over the past few years.

It is hoped that the Commission’s approach can be used as a way of facilitating the further development of SuperStream and Single Touch Payroll, and that their understanding of some aspects can be addressed in the responses to their draft report

The take out from all of this is that the industry should just get on with it, implement new technologies, and work closely with enabling bodies like the ATO and gateways to make change happen and improve the member experience.

Like all super funds and administrators, the IQ Group has been involved in the design and implementation of SuperStream and other technology solutions from the start, and we work closely to help deliver efficiencies and solve problems.